How to Use the MACD Indicator for Trading 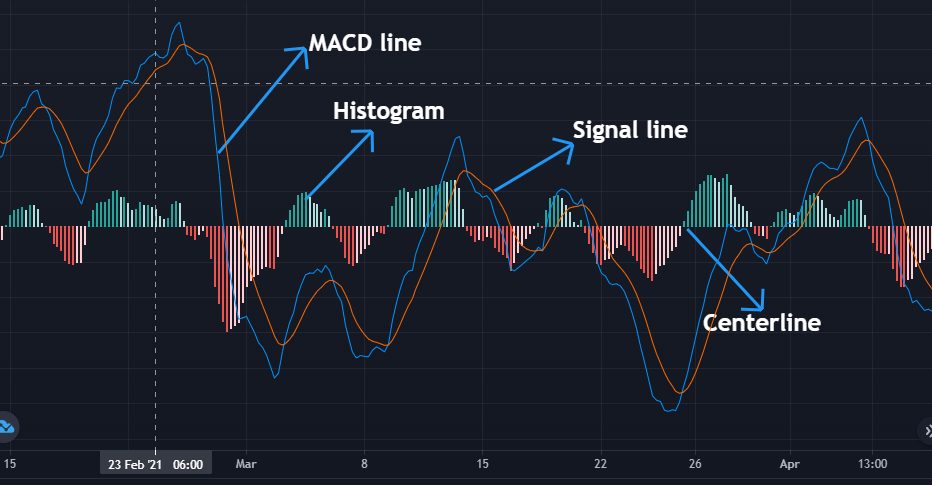 How to trade using MACD

The Moving Average Convergence Divergence, as the name suggests, tracks the relationships between two moving averages, and the co-relationship between the two lines could be described as either convergent or divergent. It is convergent when the lines gravitate towards one another and divergent when they move apart. There are usually two moving averages of different speeds, which means that one will be faster than the other. So in a new trend, the fast one will cross over the slow line. After the moving average crossover has happened, the faster line would start to diverge, moving away from the slower line, which signals a new trend.

The MACD indicator has three components, and they are:

Below is a summary of what has been written above:

How to use MACD indicator

No crossovers – This is when the MACD signal line touches the signal line without crossing it. It is to mean that the trend is going to continue. If this is combined with other indicators or strategies, it can confirm a price movement in a particular direction. For example, when there is a bullish trend, and the MACD line touches the signal line and bounces back, it confirms that the movement towards that direction continues.

Divergences between lines or histogram with price action – Divergence provides an early signal that a trend might change direction. Divergence occurs when the price makes a higher high, and the MACD line or histogram does not, or when the price makes a lower low, and the MACD line and histogram do not. There might also be a price correction or reversal indicating a shift in momentum and possible exhaustion of a short-term trend in such divergence.

The MACD line can cross above/below the centerline or above/below the signal line multiple times. It might cause many false and tricky signals, especially with volatile assets like cryptocurrencies. A trader should not rely on the MACD indicator alone. It is a valuable tool in identifying market trends and momentum; however, it is not always accurate and can provide misleading signals, especially when there is a weak trend or a sideways price action. To get the best of the MACD indicator, use it alongside other indicators to reduce risks.

Many traders use the MACD indicator with the moving average and price action. Many times when the moving average starts to give a buy signal, the signal is checked with the MACD to see if it provides a corresponding signal (according to the trader’s setup). Let’s take the 50 SMA for example; when the price breaks above the 50 moving average and is starting to signal the start of a bullish trend, such signal could be checked against what signal the MACD is signalling, and with this, the trader might have a reason to enter such trades or wait a little more.

Another way it could be used is when a market breaks out of solid resistance or support. A trader could use the RSI and MACD to check for the market condition, which could be a form of confirmation on whether to enter into such trades or not.

Please note that using MACD and what you look out for in the market strictly depends on the strategy you use. Even though there are similar factors to consider in using the MACD indicator, your trades should only rely on the pattern you have tested over time.

Limitations of the MACD indicator

There are some problems associated with divergence, and they are:

Divergence often signals possible reversal when no reversal happens. It predicts many reversals that do not end up happening.

It doesn’t forecast all reversals

It does not give specific entry points, even though it can give a point or signal to take profit.

This article has shown how to use MACD. Most importantly, the MACD indicator can only be used to confirm possible trade setups – it should not be used as a sole indicator for trade analysis.

Navigate on the Article

The best guide on how to invest in Gold

How to start trading Forex?

Photo bygeralt onPixabay Forex (also known as the Foreign Exchange Market) is the trading of currencies. It is one of the most commonly traded financial

What is forex trading?

Home » Forex, Crypto & Trading Education » How to Use the MACD Indicator for Trading

Level Up Your Trading

Help Me Choose a Broker

We help you discover what you need to excel in trading. Trusted by thousands of users and completely free!

Risk Warning:
Trading Forex, Cryptocurrencies, Stocks, CFDs, Metals and Energies with or without Leverage involves substantial risks, including complete loss of funds and other losses. Trading is not suitable for everyone.

TradingDominance will not be held liable for any loss or damage resulting from acting upon information published on this website. Market news, analysis education and reviews are personal opinions of the writers and do not guarantee that your experience and performance would be the same as what is published on the website.

We try to keep the data as fresh as possible, but since things change quite often we cannot guarantee that everything is current or accurate. If you spot something that is not accurate or it is outdated, feel free to reach to us via support and we will make sure to take care of it. While we do our best to ensure that our data is current and accurate, we encourage you to verify the information with the broker directly.